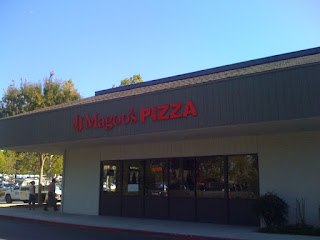 You'd think I would have caught opening day of J. J. Magoo's since I get my nails done once a week over at True Nails, and I walk that way often. I was sick with strep, what can I say. What's really embarrasing is my mother caught it just after opening day, and dragged my father down there. It's nice to have them check out places first sometimes. That's how we found out about Main Street Burgers. Which was another post.

I did manage to take a picture of it when they were putting up the neon signs, though, back in August.

And here's a nice write up of the history of Magoo's and J.J. Magoo's in the Mercury News.

I used to love the original Magoo's. They had a nice thin crust. I even remember when they had the second Magoo's where Double D's now is. The second one was supposed to be more of a sit down place rather than a pizza parlour.

We went there last night, and it was very good. The fresh tomato and garlic pizza that I loved at Mountain Mike's is there. As is the combo. It wasn't easy to squeeze the 5 of us in, but we made do. Thankfully, one of the booths is open on the side (perfect for wheelchair access) and there were chairs.

And if you want an appetizer, make sure they know you want it first, otherwise, it's served with the meal. I have to say, those were some of the best onion rings...they were large, the onion was still crisp, they used a meal coating rather than the beer batter coating, and it wasn't greasy. 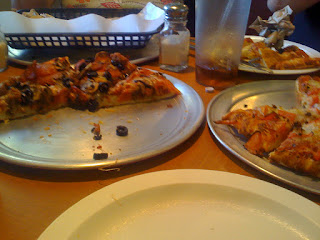 
As they mentioned in article in the Merc, they were able to keep the pizza ovens: 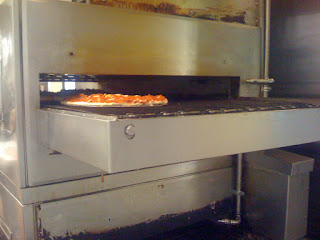 Everything really is snazzy looking. It's clean and warm and friendly. There were two parties going on while we were there. So it's definitely the happening place to go. 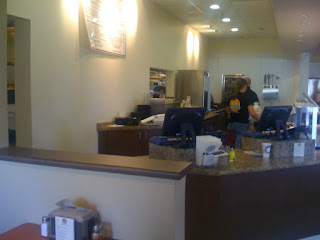 So, this Los Gatos Girl gives it two paws up. It retained all that I had loved about Mountain Mike's while expanding upon it (you should see the sandwiches!). And they're closer to me, so I can walk.
Posted by Los Gatos Girl at 7:41 AM